JPAR-009: Acid Elephant - Defenestration of a Dying Mammoth: aLive 2012 OUT NOW (and some other news) 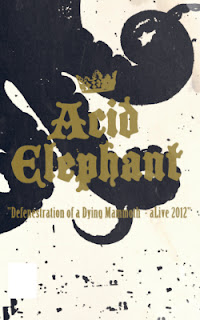 It's the end of the world! It's the birthday of Acid Elephant, a Pori/Turku based stoner/doom group. This live cassette says ”goodbye” to their old lineup and ”hello” to their new lineup. It's recorded on three different occasions; January 6th at Klubi, Turku, January 13th at Monttu Music Club, Pori and February 4th at Varjobaari, Tampere. Listen to the songs here, but please note that the tape version omits the song Sway (In my Sleep), due to the wishes of the band. The tape still contains over one hour of elephant stomping. Slipcase covers, green cassettes. Limited to 50 copies.

The price is only three euros, plus postage (70 cents). For orders, write to piparnakkeli.kamakarhu AT gmail.com or ask the Elephants themselves!

Lord Fist - Spark for the Night is sold out. You can ask it from Ektro and Heavy Merch will receive these tapes sometime after Christmas.

There's not much Bathoven tapes left, but the second edition is in the works.

Ajatuksen Valo 3,5 is sold out as well. There's still a plenty of AV4 zines left and the fifth issue should be out either in January or in February. We'll see.

Puukotus/Musta Oksennus split tape is delayed a bit, and won't be released until January. Another forthcoming tape release will be announced then.

Since the holidays are at hand, I promise to do absolutely nothing related to JPAR. Please feel free to write, but don't expect anything to happen until next week. Besides the postal services aren't functioning during the Christmas time anyway.